See what happens if I try to translate the sentence: Stereotypical people who can speak Lojban speak to each other about the languages they can speak:

What we see is that the Lojban version is much longer than the English. This is primarily because the first, ridiculously long sumti is being repeated two more times in the Lojban text, while the English can refer to it by each other and they - much more efficiently. Wouldn't it be clever if Lojban somehow had mechanisms for doing the same?

It turns out it does, what a surprise! Lojban has a range of words called sumka'i meaning sumti-representatives. In English, we refer to them as pro-sumti, because they are essentially the same as the English pronouns, but with sumti instead of nouns. In fact, you already know ti, do and mi, but there are many more, so let's get learning. First, we want to put it into system. We can begin with the ones most familiar to English, and what you've already learned:

You can again recognize the i, a, u-sequence which pops up over and over. Some things might take some clearing up, though. Firstly, these sumti can represent anything which can be said to occupy a physical space. Objects, certainly. Ideas, certainly not. Events are accepted, but only to the extent they are restricted to a specific place - the Jasmin Revolution cannot be pointed at, but some bar-fight or a kiss might. Secondly, note that the distance is relative to different things for the different words: tu only applies if it's distant from both the speaker and the listener. In cases where the speaker and listener is far apart and the listener cannot see the speaker talking, ta refers to something close to the listener. Thirdly, it's all relative and context dependent. These three words are all problematic in written text, for instance, because the position of the speaker and listener is unknown to each other, and changes as time goes by. Furthermore, the author of a book cannot point to an object and express the pointing in the book.

Then there is a series called KOhA3, to which mi and do (and ko, but I won't write that here) belongs:

These six sumka'i are more easily grasped in the below Venn diagram: 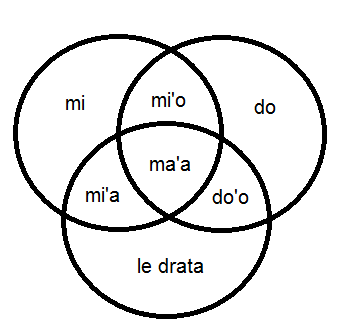 Venn diagram of KOhA3 (ko excluded). le drata is not a KOhA3, but means the other(s)

It is possible for several people to be the speakers, if one statement is made on the behalf of all of them. Therefore, while we can be translated as either mi, mi'o, mi'a or ma'a, what one quite often means is really just mi. All of these six, if they refer to more than one individual, represent masses. Within bridi-logic, the bridi mi gleki said by speaker A is exactly equivalent to do gleki said by speaker B to speaker A, and are considered the same bridi. We will come back to this later, in the brika'i (pro-bridi) lesson.

All of these sumka'i are very content-specific, and cannot be used, for instance, to help us with the sentence which this lesson began with. The following series can in principle be used to refer to any sumti:

These sumti will refer to any terminated sumti except most other sumka'i. The reason that most other sumka'i cannot be referred to by these sumti, is that they are so easy to just repeat by themselves. The exception to the rule are ti, ta and tu, because you could have changed what you point at, and thus cannot just repeat the word. (There are some other exceptions, to be handled later.) They will only refer to terminated sumti, and thus cannot, for instance, be used to refer to an abstraction if the word in is that abstraction: le pendo noi ke'a pendo mi cu djica lo nu ri se zdani - here ri cannot refer to the abstration, since it is not terminated, nor to mi or ke'a, since they are sumka'i, so it refers to le pendo.

ra and ru are context-dependent in what they refer to, but they follow the rules mentioned above, and ru always refer to a more distant sumti than ra, which is always more distant than ri.

ri and it's brothers are pretty well suited for dealing with the original sentence. Try saying it using two instances of sumka'i!

Lastly, there a sumtcita which represent utterances: So called utterance variables. They need not be restricted to one sentence (jufra), but can be several sentences, if the context allows it:

These represents sentences as sumti, and refer only to the spoken words or the letters, not to the meaning behind them.

There are more Lojban sumka'i, but for now you probably need a break from them. The next lesson will be on derived sumti, sumti made from other sumti.