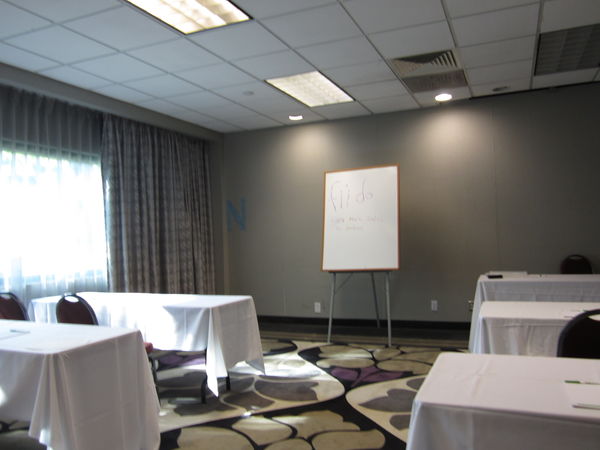 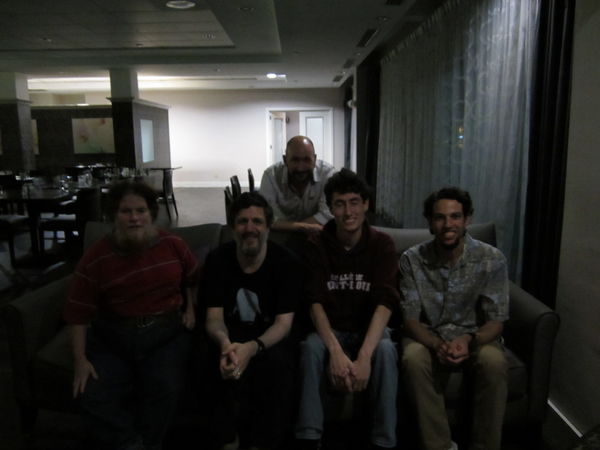 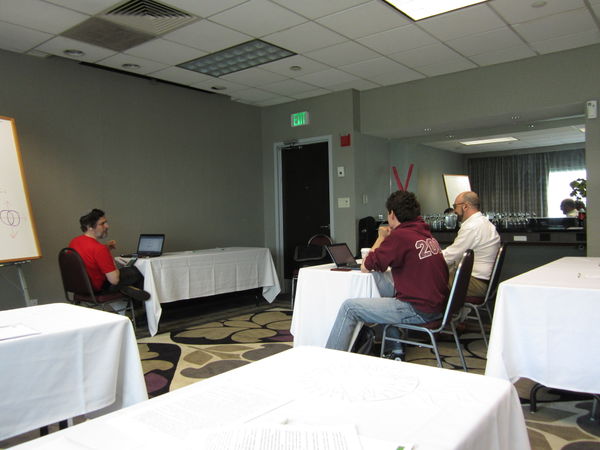 I came from North Carolina, spending two nights at my sister's house in Delaware. For several days before leaving, I had been busy enough editing the middle third of Ki Tetze' (jamna in Lojban) that I didn't have time to make the four letters for cardinal directions. I asked my sister; she suggested making each out of a different color of construction paper. So I did.

A few hours before I left home, Mark Shoulson told me he planned to arrive Friday afternoon. I emailed Lorit, who works at the hotel, telling her that la .clsn. as well as la tsani would be staying in the common room. To recognize him, I sent the URL of a picture and asked her to ask him in Hebrew to translate from Welsh to Klingon. Unfortunately, Lorit was not there when I arrived, so I explained the situation to whoever was at the front desk. I happened to be near the front desk when la .clsn. arrived, with the same "o'asai" shirt as in the picture, so I identified him to the front desk guy and he got the key.

Next morning, after enough five people had assembled in the meeting room, I handed out copies of the middle third of "jamna" (Deut. 23-24), which we read, taking turns. This is the parashat hashavua` scheduled for that day. (The parashah begins "As you go out to war", but the seventh is "[Jacob] went out", so I called it "war" to avoid confusion, since Lojban has no verb inflection.)

After editing CLL a little bit, I went to my room and took a nap. During this time, Brian arrived, but having arrived from England, he fell asleep before I returned to the meeting room.

After dinner, we gathered in the common room to watch la bripre jikca. I took la durka to the train station and went back to my room.

Sunday morning I ate breakfast before the others. When the others arrived for breakfast, Brian showed us the nooLearn program, and we discussed various things, such as how to say "land" (as in "the plane lands").

Later that day we entered lots of questions for a Lojban proficiency test.

At dinner la .clsn. showed us his watch displaying the date in Roman numerals, which prompted a discussion of leap day. I explained why leap year is "année bissextile" in French (the sixth day before the calends of March is doubled), which la tsani didn't know, despite growing up speaking French. We split up the other way, with two heading home and the other two back to the hotel. I left the next morning, heading first back to my sister's house.