The script was originally intended to be written without lifting your pen, however it was found that creating enough permutations of unbroken lines to fill Lojban's 25 letter alphabet became stupidly complex very quickly. Thus began experimentation with simple ways of looping, breaking and bending lines, producing 23 unique letters, which were gradually stripped down to 18 unique symbols, the rest completed with the diacritic flick.

Chart of the main Lojban lerfu

Srilermorna has one diacritic mark, the flick. The flick represents vocalisation in the pairs ty./dy., ky./gy., fy./vy. and py./by.. It also marries the pairs ly./ry. and ny./my., where it does not strictly represent vocalisation but simply pairs similar sounds.

Marking with the diacritic flick

The denpa bu, stop or 'dot' in Lojban has two incarnations in srilermorna, a prefix version and a suffix version. In accordance with its role in spoken Lojban, the stop 'stops' the continuing line of a word. In the case of a prestop, as used in attitudinals and connectives, it begins the line with a small vertical stroke from half height above the baseline, and a poststop, used in cmene, is the same but downwards from the baseline, to half-height below, ending the line.

In addition to these, another, very specific stop is used in transcribing proper names, the comma. The srilermorna comma looks like this:

and functions as normal, example

Irregular stress, indicated in the latin system with capital letters, is notated in srilermorna by a straight, horizontal bar which sits above the irregular syllable.

An example of handwritten srilermorna, on lined and square paper

Srilermorna letters tend form more cleanly when the pen is moving quite quickly.

When writing on lined refill, the recommended method is to use two lanes per line of text, using the blue line in the centre as the baseline.

Although not vital to the legibility of a text, accurate spacing is a surprisingly big part of srilermorna's overall aesthetic. Cramped letters become cluttered and messy, although not necessarily unreadable. All letters should be roughly evenly spaced, including spaces. The writer might imagine a grid in which one box fits a single letter.

As evidenced in the computerised lettering above, the script is takes its style from calligraphic strokes using a broad tipped pen. A paintbrush or brush-tipped felt pen also works well, and calligraphic writing recreates the aesthetic effect intended by the script. This form is suited to presentation of poetry, art or other artistic media. 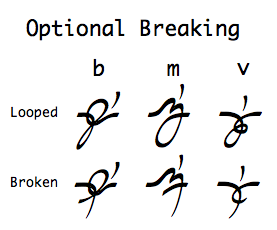 Optionally, the writer can 'break' a marked, looped consonant in order to write the diacritic flick without having to backtrack over their finished word. The letters cy., jy., zy., ry. gy. and dy. already involve lifting the pen from the paper so do not present an issue. It is the writer's discretion whether he or she prefers breaking or backtracking in their writing.

Typed srilermorna spaces itself, and lends itself equally well to center or left-side alignment, but due to the strict regular spacing, should not be justified lest the lines break.

The script is implemented as a truetype font over the latin character set. Therefore it should be totally cross-platform and map directly to any western keyboard configuration. It does not have any special input method, save for the following features: